On Friday 2nd December 2022 we were guests at the international event of the Digital Civic Participation project in Athens. The project is co-funded by the European programme CERV and aims to innovate the process of civic education and to increase the participation of youngsters in their communities.

The meeting was attended by all project partners from different European countries including Greece, Romania, Poland, Lithuania and Italy. In addition, some Greek yougsters participated too; they stayed with us for the entire day of work and contributed with their ideas and knowledge.

Irtea, the Greek partner, organized this international event to allow all the organizations involved in Digital Civic Participation to present the results obtained during the project’s actions that have just ended, such as: a research about national digital participation, two workshops and an online survey. All these actions had the digital participation of citizens as their main theme and the goal was to gather information on it. 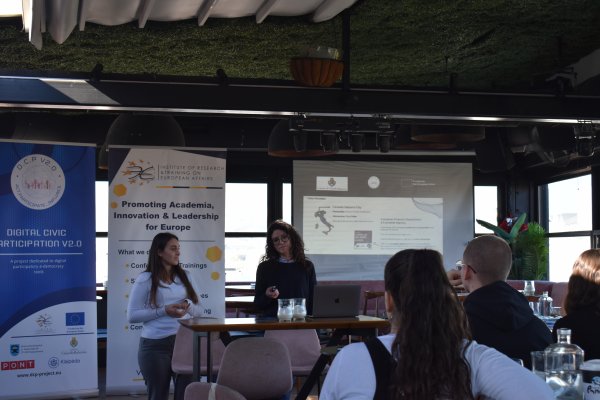 Once the results obtained at national level were presented, we had the chance to give our opinion during two workshops. The activities aimed to collect data for the creation of one of the project’s outputs, a Handbook containing all the good practices of Digital Participation implemented in the the european countries involved.