A NEW COLLABORATION BETWEEN EURODESK AND ARCIPELAGO COOPERATIVE!

Last Friday, June 21st, our Eurodesk information desk started a new collaboration with a new reality in the territory: the Cooperative Arcipelago Anffas NordMilano. Thanks to the support of the educators, we started a path that talks about European Union, opportunities and project, together with a team of young people with mental disabilities. 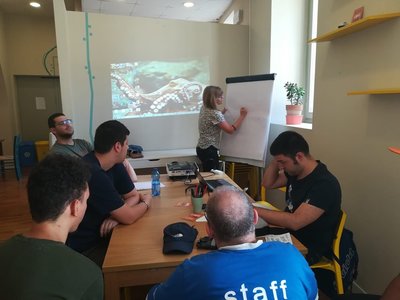 The goal is to get to submit a funding proposal written by the young people themselves through the new European Solidarity Corps program, which offers the opportunity to implement local initiatives proposed and managed by young people under 30 that are able to bring about positive change in their city.

In the first meeting we clarify what the European Union is, how it works, what its goals are and how European calls work.

Starting next week, the group will begin to define the project proposal, an idea born from the boys themselves and from the analysis of their particular need: to be able to access the places of culture, not only physically, but also -above all- through explanations and simplified paths for an easier understanding.

We will keep you updated!