The project BASE – Be Active Shape Europe, funded by the European Commission within the programme “Europe for Citizens”, promotes the participation of young citizens in order to give them the opportunity to contribute in the social and political life. It concluded with an online meeting between the participants of all the countries involved: Greece, Italy, UK, Slovenia, Portugal and Bulgaria.

Despite the limitations imposed by the health emergency, it was a great opportunity to live an international experience… even if at a distance!

The international workshop took the form of a European Parliament simulation and took place between the 12th and the 15th of March 2021.

During the first meeting on Friday 12th March, the participants (all young people aged between 15 and 30) presented themselves so as to break the ice and get to know each other and, subsequently, they divided into groups. These symbolized the different parties of the European Parliament and each boy/girl had the task of impersonating one of its representatives. The main topics of discussion were:

After working in small groups, the participants had to produce one document, common to all the major parties of the European Parliament represented by the groups themselves, which contained the main ideas and proposals that emerged during the debates.

Through the Eurodesk Office of Cinisello Balsamo, 8 Italian girls and boys took part in the project. They participated actively, sharing their ideas and opinions with other European citizens and, in the end, they were all very pleased with the experience. Here are their reports:

Tommaso (17 y.o.): “At first I was a bit skeptical, I was afraid that the fact of being online necessarily made the project boring, but I almost immediately changed my mind. I liked the activity and despite my young age I intervened many times and I never found myself discussing with people who imposed themselves because of their age or course of study. I had the opportunity to meet very nice and helpful people with whom it was immediately easy to work on the project, without any problems, nor misunderstandings. In addition, this activity allowed me to listen to new proposals and to reflect on my own with greater awareness and in a new perspective. Perhaps the only flaw was the complexity of some procedures, although they were necessary for the simulation and the identification. If I were asked to take part in the same initiative again I would not hesitate to reply!”

Giulia (17 y.o.): “It was the first activity of this kind that I had the opportunity to participate in. At first I was frightened by the age difference between me and the other participants, some of whom also graduated, but in the end it was not decisive. This initiative gave me the opportunity to learn more about current issues and integrate what I already knew with what my "parliamentary colleagues" said. It was well organized and the staff was very helpful with anyone who had technical problems. Getting involved in these projects is always the right choice.”

Sofia (18 y.o.): “The experience done with the project BASE was stimulating and engaging. Structured as a simulation of the European Parliament, the aim of the activity was to produce a document, common to all the major parties in the parliament, which contained indications and objectives for building our ideal Europe. The final product was a file that contained aspirations, projects for the future of the EU and ideas for a different and better reality. I get along with all the other participants and it was really interesting to see how, despite the differences, we have the same goals. I am very happy I participated in this experience and I am sure that this activity has enriched me both at a cognitive level (experimenting the functioning of the European Parliament and its dynamics) and at a human level (giving me the opportunity to talk with people I otherwise would have never talked to).”

Alessia (22 y.o.): “the project BASE was very interesting and it enabled me to better understand how European legislation works. We were divided into the major parties of the European Parliament, with the aim of creating a common document to build Europe as we would like it to be. The simulation gave me the opportunity to understand in detail how decisions are taken. I get on well with the other participants, all with a great desire to engage and know better how Europe works. Even the organizers were very helpful and kind. I am glad I participated.”

Laura (20 y.o.): “thanks to this project I had the chance to participate in a brainstorming among European youngsters with a lot of ideas for the future. Be Active Shape Europe was born with the intent of simulating the European Parliament and a debate among different parties to gather ideas, solutions and projects concerning different themes an phenomena such as climate change, European citizenship, migratory crisis, democracy… and above all youth’s opinions. This meeting between cultures and realities made me feel part of the European community: Greeks, Portuguese and Italians all share the same hopes and goals despite the distance and the current problems.”

Maria (24 y.o.): “with great enthusiasm and interest I took part in “Be Active Shape Europe!”. The project had as its final purpose, the engagement of young Europeans and the promotion of a conscious citizenship. This experience was very constructive for me because it enabled me to better understand the dynamics of policy making processes in the European Parliament, to get in contact with lots of youngsters coming from different European countries and to tell my opinion as a European citizen! We discussed and deepened themes that are crucial for our period of time, such as sustainable development and civic involvement and I believe it was a fantastic way to learn while having fun!” 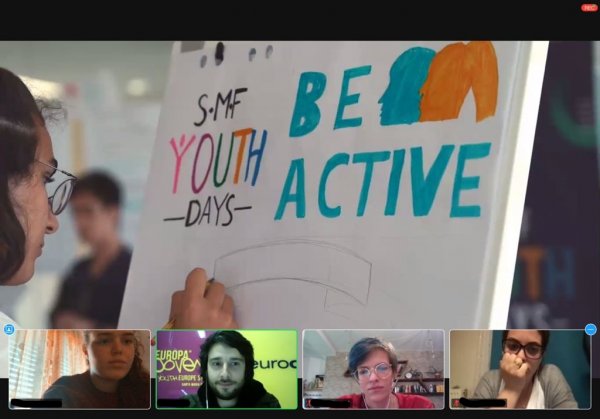